Please note that all descriptions which present factual information are based on a lecture given at the sites shown by Else Roesdahl on June 25, 2008. 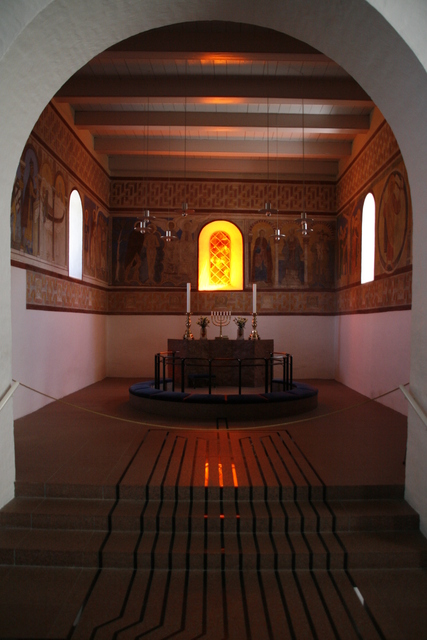 An East-facing view of the interior of the Medieval (c. 1100 CE) church at Jelling. The church appears to have been the 3rd church built on the same site and is postulated to have been dedicated to John the Baptist, based on the original murals. The current murals seen here at the left and in the center of the frame are reproductions of the originals, while the mural on the right does not reflect the original, which was too damaged to accurately reproduce or restore. The flooring is distinctly modern, and was laid after a recent excavation of the church's interior, followed by a re-interment of the male remains found under the church, which we assume to be those of King Gorm. Those remains, based on their position, were placed under the church when the corpse was already disarticulated, leading to the current theory that the remains are those that were removed from the Northern mound's burial chamber.
The Northern mound has been dated to 958-959 CE by dendochronology, and archeology shows that the first church was built out of wood and Harold's Runestone (i.e. 'The Jelling Stone') was placed circa 965-970 CE. This timing corresponds to what we know of Harold's conversion to Christianity, so the current theory is that Harold had his father's remains moved into a 'Christian grave' after converting.